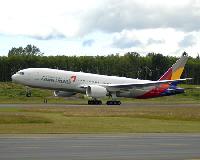 SEATTLE — The South Korean-based airline introduced its new livery during a celebration in November 2006, which features a tail design using traditional Korean colors on a gray background. The airline’s fleet will be converted to the new livery over the next five years.

Asiana operates a mixed fleet of more than 60 airplanes, including 737s, 747s and 767s, that connects more than 60 cities in 17 countries. The twin-engine 777 is the most fuel-efficient airplane in its category, a key element in its leading economic performance, and it releases fewer emissions into the environment than its four-engine competitor. 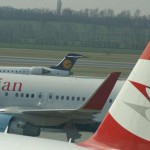 Provides More Choices of Travel Options to Customers in Korea and the U.S.

The Boeing Company and Asiana Airlines have completed an order for two 777-200ERs (Extended Range). The order is valued at $438 million at list prices.