Iberia is to launch flights to Boston from May, joining American Airlines and British Airways in serving the New England airport.

The Spanish airline will operate non-stops to and from its Madrid hub an initial five times a week.

It will be the third oneworld member to serve Bucharest when it launches services between the Romanian capital and Madrid from 3 March with an initial two round trips a week. British Airways and Finnair already serve the city, along with member elect Malév.

Iberia has just launched a link between Madrid and Algiers with an initial two return flights a week, operated by Airbus A319s. Algiers is also already on the oneworld network through services by British Airways. 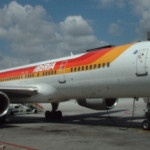