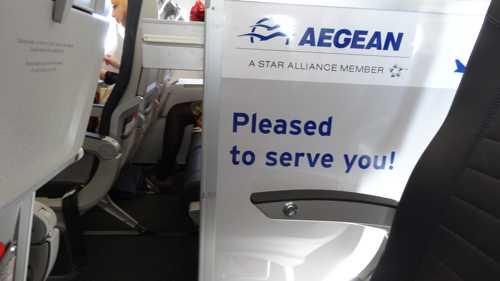 Heraklion – AEGEAN, a Star Alliance member, asserted its role in the development of Greek tourism and economy with the presentation of the company´s summer network for 2015. AEGEAN’s summer timetable was presented by the company´s Management at a Press Conference held in Heraklion, Crete, attended among others by the Minister of Tourism, Ms Olga Kefalogiani, the Regional Governor of Crete, Mr. Stavros Arnaoutakis, representatives of the local authorities as well as members of the private sector.

The company´s new timetable includes a network of 134 destinations, 100 international in 42 countries and 34 domestic, with 15,000,000 available seats, i.e. 2 million more seats than in 2014. The flights will be performed with one of the youngest fleets in Europe, comprising 56 aircraft, after AEGEAN´s recent investment in new additional Airbus A320ceos.  The flight increase will be more intensive in 2015 from the main base of Athens and Heraklion, but shall also cover activities from other 6 bases of the company (Rhodes, Corfu, Chania, Kos, Kalamata & Larnaca).

The Athens network is further developed with the opening of new markets in new countries and cities in traditional countries, but also the tourist season is extended both in Athens and small islands, which need the development of the Athens hub to support their growth. A key target for 2015 is the more effective spread of tourism growth in small areas still lagging behind. For this purpose, 15 new destinations and 9 new countries are added in the Athens network, while AEGEAN shall connect the capital of Greece with 91 destinations in total (61 international, 30 domestic) for which 11.5 million seats will be available. Furthermore, the frequency, capacity and connection with islands such as Naxos, Milos and Paros are increased greatly.

In total, the 15 million seats available for 2015 correspond to 7.7 million seats in international flights to 100 destinations and 7.3 million seats in domestic flights to 34 destinations. This assures even fuller domestic coverage, as well as the dynamic support of incoming tourism towards all the Regions of Greece. In addition, as reflected in the 2014 results, with the support of the enhanced network and also the lower flight fares, the company shows a balanced growth both abroad and in Greece, with its total activity exceeding 10 million passengers, for the first time in the history of the Greek company.

From Heraklion, where the Press Conference took place, the company shall perform in 2015 direct flights to 44 international destinations in 21 countries, thus continuing the systematic development and support policy for this area.  Indeed, within the next year an important increase in regular flights will take place; 1.95 million seats shall be available, i.e. 21% more than 2014.

Finally, AEGEAN presented its programme “12 months with good news for You”, in accordance with which in 2015 the company shall present a new product or service every month. This reinforces the company’s promise to bring families closer and make it easier for professionals, young people and its loyal passengers to travel.

During the Press Conference, Mr. Eftichios Vassilakis, Vice-Chairman of AEGEAN, said: “2015 is a milestone year for AEGEAN. We are investing in new aircraft, a new network of 134 destinations, offering 15 million seats. We proceed with a strong enforcement of the Athens hub, while we also support regional growth with increased flights from our regional bases. We resume and boost the policy to support small islands, whose results in 2014 were impressive, in order to highlight the multiple aspects of the Greek tourist product. But, above all, we renew our promise to differentiate and develop our services further for the benefit of our passengers. Our new programme „12 months with good news for You“, represents our quality promise for innovation, offers and services in 2015.  The combination of growth and competitiveness, as well as our service further development is a common target for our company and our country.“