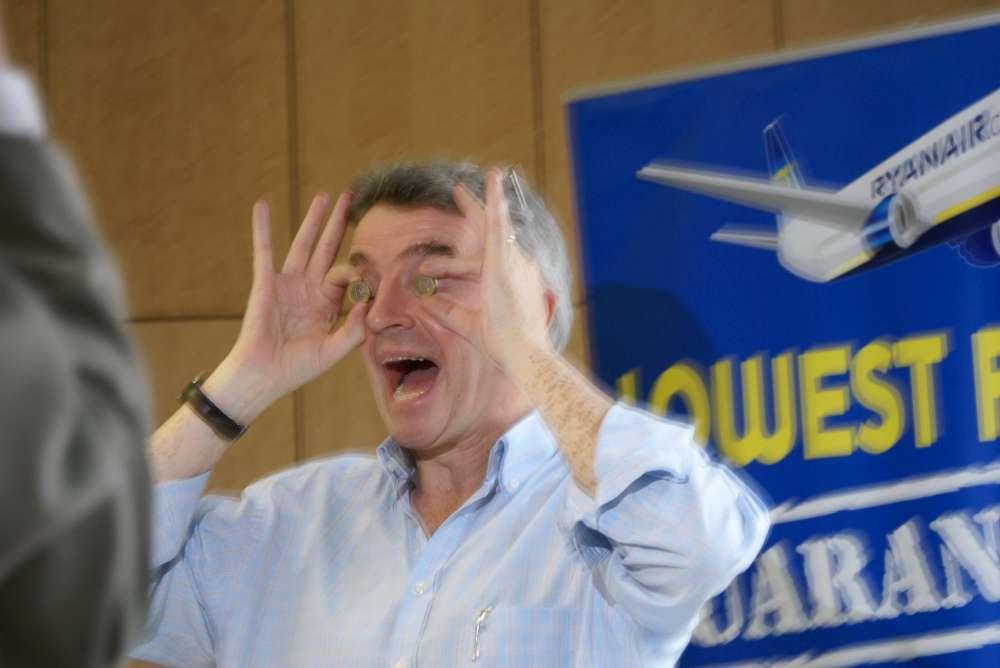 “Our Q3 loss of €35m is in line with previous guidance and is entirely due to a 9% fall in ave fares and weaker sterling.  We responded to this weaker pricing environment last September with seat promotions and lower fares which stimulated traffic across all markets resulting in 6% growth in Q3, and a 1% rise in monthly load factors.  Ancillary revenues grew by 13%, significantly faster than traffic growth due to strong customer uptake of reserved seating, priority boarding, and higher credit card fees.  Excluding fuel, Q3 sector length adjusted unit costs fell 9% as Ryanair continues to deliver industry leading cost control.

Our new routes and bases are performing well this winter, albeit at weaker yields, as high fare competitors cut capacity and restructure.  In December we opened 4 new Italian bases in Rome (Fiumicino), Catania, Lamezia, and Palermo in response to concerns about Altalia and its high fare domestic routes.  We announced 4 new bases for spring 2014 at Brussels (Zaventem) which opens February 28, Athens and Thessaloniki (April 1) and Lisbon (April 2).  Advance bookings on these new routes are well ahead of expectations, with customers welcoming Ryanair’s lower fare alternative.  We expect these new bases to provide substantial growth opportunities for Ryanair, particularly as we commence deliveries in September 2014 of our new 175 Boeing 737-800 NG aircraft order.  Over the next 5 years, as Ryanair grows from 80m to over 110m customers p.a., we expect a substantial portion of this growth will be at primary airports, where high fare incumbents are financially weak and restructuring, and the remainder arising at secondary airports driven by attractive low cost growth incentives.

In Q3 Ryanair announced a series of initiatives to further improve our industry leading customer service.  In addition to the lowest fares, the most on-time flights, and the youngest fleet, our customers are now enjoying, (i) a simpler easier to use website, (ii) a free small second carry-on bag, (iii) “quiet flights” in early morning and late evening, (iv) a 24 hour “grace period” to correct minor booking errors, (v) significantly reduced boarding card and airport bag fees, and (vi) a new service to cater for group and business travel across our extensive network.

Last weekend Ryanair returned to allocated seats on all flights.  Ryanair customers can now select their preferred seats which reduces queues and eliminates stress at boarding gates.  Allocated seating enables customers to choose their preferred seats, be it aisle or window, front or back, up to 30 days prior to departure.  Those passengers who don’t wish to pay a small €5 fee will have a seat allocated to them, at no charge, during the 7 days prior to departure.  The uptake of reserved and allocated seats has grown significantly in the last weeks of January, and it now appears that sales of reserved/allocated seats will exceed the revenue loss from cutting airport and bag fees.  This should enable Ryanair to deliver strong growth in ancillary revenues in FY15 during which we hope these customer service improvements will deliver stronger forward bookings and load factors.

Ryanair is also implementing a total overhaul of our website and digital strategy.  This roll out started in November with a new, easier to use website, which reduced the booking process from 17 to 5 “clicks”.  In December we launched the “My Ryanair” customer registration service which allows passengers to securely store their personal and payment details and saves them time when making or managing their bookings and/or checking in online.  We are investing heavily in IT and web development, and expect to deliver a new improved website by the end of April which will be much more intuitive for our customers, allowing them to readily identify our lowest fares, our routes, our timetables, as well as enabling them to share our low fares with friends and family.

We are also on target to roll out mobile boarding passes in April, a new business travel product by the end of May, and an industry leading mobile app (tailored for smart phones and tablets) by the end of June 2014.

In addition to these digital improvements, Ryanair is working to broaden our distribution base.  We are proud to be the first low fares airline to partner with Google’s European “Flight Search” function, which is currently available in the UK, France, Germany, Italy, Holland and Spain (with more countries to follow).  This partnership will enable millions of European consumers to access our 1,600 low fare routes and book Ryanair’s lower fares every time they search for “cheap fares”, or “low cost flights” on the Google “Flight Search” engine. We believe that Google’s “Flight Search” engine will become the transparent price comparison site of choice for all passengers in Europe.  We are in active negotiations with a number of GDS suppliers, and hope, subject to the successful conclusion of these discussions and IT integration issues, that Ryanair’s low fares and comprehensive route network will appear in one or more GDS channels by mid-year.  The combination of Ryanair’s low fares, extensive route network at primary and secondary airports and No 1 or No 2 market share in most of Europe’s major travel markets, will enable Ryanair to deliver a significant business travel platform, and allow Europe’s largest businesses save both time and money by flying Ryanair.

Ryanair is 90% hedged for FY14 at a cost of $980 per tonne (approx. $98 p.bl), we have taken advantage of recent oil prices and dollar weakness to extend our hedge position to 90% for FY15 at $960 per tonne (approx. $96 per barrel), which together with the benefit of our euro/ dollar hedging programme will deliver fuel cost savings of approx. €80m in 2015.

Our balance sheet is one of the strongest in the airline industry.  By the end of Q3 Ryanair had completed another €414m of share buybacks, and announced a systematic share buyback programme of €70m to be completed by the end of March bringing the total of buybacks for FY’14 to €484m, significantly ahead of our original €400m target.  We remain committed to returning a further €500m to shareholders via a mix of special dividend and some limited share buybacks by the end of FY’15.  This will bring the total funds returned to Ryanair shareholders since FY’08 to over €2.5 billion.

Market pricing remains soft but is no longer declining.  We reacted quickly to last autumn’s weakness with a range of lower fares, seat promotions, and recently increased advertising and marketing spend.  As a result forward bookings in Q4 and into FY’15 are running significantly ahead of last year, albeit at weaker yields.  We expect our strategy of lowering fares and increasing forward bookings will enable us to better manage close in bookings and yields as we move into summer 2014.   Thanks also to the earlier launch of new bases in Italy and Brussels (Zaventem), and rising load factors we expect FY’14 traffic to rise to 81.5m, slightly higher than previously guided.  Advance bookings for Q1 FY’15 are significantly higher than this year’s comparable, even allowing for the impact of Easter.  Based on current visibility, we expect Q4 yields to decline by approx. 8%, slightly better than the 10% decline previously guided.  As full year traffic will be slightly stronger, and our focus on cost control delivers a 4% fall in Q4 (ex-fuel) unit costs, we are now confident that the full year net profit outturn will finish in the range of €500m to €520m as previously guided.”

Certain of the information included in this release is forward looking and is subject to important risks and uncertainties that could cause actual results to differ materially.  It is not reasonably possible to itemise all of the many factors and specific events that could affect the outlook and results of an airline operating in the European economy.  Among the factors that are subject to change and could significantly impact Ryanair’s expected results are the airline pricing environment, fuel costs, competition from new and existing carriers, market prices for the replacement aircraft, costs associated with environmental, safety and security measures, actions of the Irish, U.K., European Union (“EU”) and other governments and their respective regulatory agencies, weather related disruptions, fluctuations in currency exchange rates and interest rates, airport access and charges, labour relations, the economic environment of the airline industry, the general economic environment in Ireland, the UK and Continental Europe, the general willingness of passengers to travel and other economics, social and political factors.