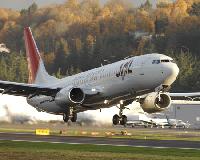 Japan Airlines (JAL) took delivery of its first Boeing [NYSE: BA] Next-Generation 737, a 737-800 that will seat 165 passengers in a two-class configuration. The airplane, which features stylish and energy-saving Blended Winglets, is one of 30 737-800s that JAL ordered in May 2005.

SEATTLE  – The airline selected the 737 because of its confidence in the airplane’s technology, flexibility, reliability, and economic and environmental performance. „This 737-800 represents another significant milestone in our long history with Japan Airlines,“ said Boeing Commercial Airplanes Vice President of Sales Larry Dickenson. „The 737 is the best airplane in its class for fuel efficiency, providing the lowest operating costs, and leads the industry in reliability.“

The Boeing 737-800 consistently places as the top-rated airplane in a key investor poll. 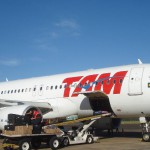 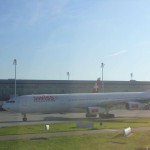