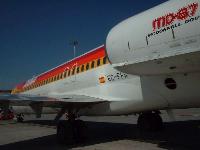 Oneworld has been named the World’s Leading Airline Alliance for the seventh year running in the World’s Travel Awards – described by the Wall Street Journal as the „travel industry’s equivalent of the Oscars“.

Oneworld has retained the leading airline alliance title every year since this category was introduced by the World Travel Awards in 2003.   oneworld is also a three-time winner of the Best Airline Alliance title from Business Traveller magazine.

The 2009 award was presented at a ceremony in London last night – 24 hours before oneworld adds as its newest recruit Mexicana, which is the World Travel Awards‘ 2009 Leading Airline for Mexico and Central America for the 11th year running.
The World Travel Awards are based on votes cast by more than 180,000 travel agents and other travel professionals worldwide.
oneworld Managing Partner John McCulloch said: „oneworld’s focus has always been on the quality rather than the quantity of our members, so it is very heartening to retain our record of being the only alliance ever to win this World Travel Award since it was first presented seven years ago.  It is a tremendous vote of confidence once again from some of the most knowledgeable people in the travel industry worldwide.“

About oneworld
oneworld brings together some of the best and biggest names in the airline business – American Airlines, British Airways, Cathay Pacific, Finnair, Iberia, Japan Airlines, LAN, Malév Hungarian Airlines, Qantas and Royal Jordanian, and around 20 affiliates including American Eagle, Dragonair, LAN Argentina, LAN Ecuador and LAN Peru.  Mexicana and its affiliates MexicanaClick and MexicanaLink join the alliance on 10 November 2009 and Russia’s S7 Airlines in 2010.

Between them, these airlines:

It is the only alliance with any airlines based in Australia, South America or Asia’s Middle East.
The alliance enables its members to offer their customers more services and benefits than any airline can provide on its own.  These include a broader route network, opportunities to earn and redeem frequent flyer miles and points across the combined oneworld network and more airport lounges.   oneworld also offers more alliance fares than any of its competitors.