Riga/Tallinn – As AirBaltic improves transit via Riga and offers increasingly more destinations, with attractive prices, in Western Europe, Scandinavia, Mediterranean and the CIS, the number of Estonian travellers via the Latvian capital continues to grow. The number of passengers of AirBaltic has grown 68 % on the flights to/from Estonia in the first seven months of 2009 when the airline carried 99 055 passengers. The number of passengers stood at 58 754 in the same January-July period in 2008.

This year AirBaltic has introduced two new routes originating from Estonia. On July 3, AirBaltic started operations on the Tartu-Riga route that offers excellent connections to destinations such as Berlin, Zurich, Venice, Vienna, Moscow, Tashkent, and others. On October 1, the first flight will be operated on Tallinn-Turku, which is the first new route of AirBaltic that links Estonia and Finland, and improves travel between the two European Cultural Capitals of 2011.

AIR BALTIC CORPORATION (AirBaltic) is a joint stock company that was established in 1995. The primary shareholders are the Latvian state, with 52.6% of stock, and SIA Baltijas aviācijas sistēmas, with 47.2% of stock. The AirBaltic fleet consists of 31 aircraft – ten Boeing 737-500, eight Boeing 737-300, two Boeing 757-200, and eleven Fokker 50 airplanes. AirBaltic offers nonstop flights from two Baltic capital cities – Riga and Vilnius. 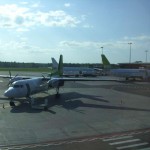 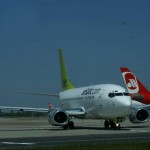