Jo’burg – The short haul and domestic tourism markets are proving to be very lucrative and valuable to South Africa and consequently these markets must be nurtured and developed, Marthinus van Schalkwyk, the Minister of Tourism said today.

Minister van Schalkwyk was speaking at the unveiling of a mural that is part of South African Tourism’s (SAT) domestic marketing campaign known as Sho’t Left. At the event he noted that short haul tourists – domestic tourists and tourists from African land markets – remained South Africa’s largest source of both visitors and tourism revenue.

„Despite the international economic downturn, our local tourism industry has managed to keep its head above the water and has in fact performed well amidst difficult circumstances. Foreign arrivals to South Africa reached an all time high of more than 9.5 million in 2008 and we will undoubtedly reach our target of 10 million foreign arrivals in 2010,“ the Minister said.

„It is important to understand, however, that in order to continue to build a sustainable tourism industry, we cannot rely on foreign arrivals too heavily, as this market can be very volatile. In this respect, it is extremely encouraging that short haul tourism has been performing so well.

„In fact, African land markets drove our growth in arrivals in 2008, with 460 000 arrivals, which represents growth of 7% over 2007. In terms of domestic tourism, 14 million South Africans travelled domestically in 2008, which is one million more than in 2007. Although the number of trips declined by 8% to 2007, the total annual spend on domestic tourism in 2008 increased in real terms by 17% to R25.8 billion,“ Minister van Schalkwyk said.

„We understand from the latest domestic tourism figures that under the current market conditions, many South Africans and visitors from short haul markets are again discovering their own backyards, so to speak. Visitors are again realising the exceptional value for money South Africa offers as a destination, and we must step up our efforts to boost domestic tourism,“ the Minister said.

„Local tourism is the mainstay of any national tourism industry. South Africa’s recent successful hosting of a variety of events ranging from sporting events like the IPL Tournament and Confederations Cup to arts festivals and large conferences gives South Africans every reason to be proud of their country as a destination.

„Our Sho’t Left campaign, which is now in its fifth year, educates South Africans about the benefits of travelling in their own country and aims to inspire them to explore. The campaign also makes it easier for South Africans to travel domestically by offering value for money packages through joint marketing agreements with the local travel trade,“ said Minister Van Schalkwyk.

„The mural we are unveiling today as part of the Sho’t Left campaign is a visual representation of the inspirational nature of the campaign. The current Sho’t Left campaign aims to grow the number of young domestic travelers. The young artists who have created this artwork have given a vibrant and graphic representation of our destination that will appeal to other young people. It also gives Durban residents a beautiful, engaging and celebratory portrayal of our country to look at as they go about their daily business,“ Minister van Schalkwyk said.

It is the second such work of mural wall art to be unveiled in South Africa. The first, in Newtown, Johannesburg, was unveiled last year. KwaZulu-Natal was the apt choice for the second phase of the mural project, as in 2008 it received the largest number of domestic tourists of all nine provinces. The wall mural at The Cube in Innes Road is a project of South African Tourism in partnership with regional destination marketing organisations Tourism KwaZulu-Natal (TKZN) and Durban Tourism.

Minister van Schalkwyk said the government recognises the importance of tourism as a sector in terms of its fast growing contribution to economic growth and job creation. „In addition to this, the development of small and medium-sized businesses and entrepreneurs from previously disadvantaged communities is of particular importance to us. Our department has a number of initiatives in this regard, and through our Tourism Enterprise Partnership we have already facilitated transactions worth more than R4 billion and assisted more than 5 500 tourism SMME’s.

„I am therefore particularly pleased to have been able to share this event with Ms Brenda Roopai, the winner of last year’s South African Tourism Emerging Tourism Entrepreneur of the Year Award (ETEYA). Ms Roopai embodies the spirit we celebrate in August as part of Women’s Month and her success should encourage other women to follow her example and build careers and businesses in the travel and tourism industry,“ Minister van Schalkwyk said.

The initiative was also welcomed by Mr Peter Bendheim, Project Executive at Durban Tourism, saying as a result of the Sho’t Left wall mural initiative The Cube is now colourful and decorated in a manner that represents cultural heritage of the city and province. „The mural itself is painted by a collaborative group of Durban artists known for the Human Rights wall painting at the Durban ICC. We hope The Cube, which features the best view of the 2010 Moses Mabhida stadium, will become an important tourist lookout spot in 2010. The city has developed its own localised version of the Sho’t Left campaign called Asambe, which aims to give people a true taste of township life,“ Bendheim said.

„The benefits of domestic travel are clear,“ says Ndabo Khoza, CEO: TKZN. „Tourism KwaZulu-Natal is pleased to be working hand in hand with our national partner South African Tourism. Most of all, we appreciate the support from the Ministry of Tourism in helping to grow our industry.“ 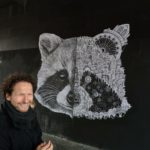