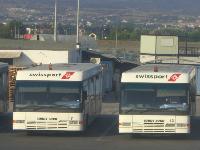 Zurich – The coming months will, however, pose major challenges throughout the aviation sector.

Swissport was not entirely immune from the difficult developments within the air transport market, but can nevertheless look back on an encouraging business year. Once again – for the 11th year in succession – the world’s leading provider of aviation ground services increased its total operating revenue. The year also brought further business progress that saw Swissport establish new operations in Cyprus, Bulgaria and Ukraine and assume responsibility in South Africa for all home carrier South African Airways’ ground handling at six airports including SAA’s Johannesburg hub. The only less favourable development during the year was the closure of Swissport’s Singapore operation.

The entire airline industry is currently in a difficult situation. According to IATA, world passenger volumes increased 1.6% last year, while cargo volumes rose 4%. The revenue trends for November 2008 to February 2009 are worrying, however, with sizeable declines in all areas and cargo especially hard hit with a fall of some 20%.

That Swissport can post a revenue result for 2008 which must be viewed as encouraging given the circumstances in which it was achieved is due largely to its strong competitive position and its rigorous cost management. The company’s three divisions of Ground Handling, Cargo and Aviation Specialty Services all made broadly equal contributions to the positive revenue trend, as did the two most important markets of Europe and the USA.

A bleak outlook for 2009
Reliable projections are currently a rarity among aviation service providers, but there are few indications at present of any imminent business recovery. Swissport, too, is preparing itself for a stagnation in its revenues in 2009, and will be striving to take the corrective action needed to bring greater flexibility to its biggest fixed-cost positions over the next few months. Swissport expects little improvement in the general market situation before 2010.

Swissport International Ltd., which is owned by Ferrovial, a leading European infrastructure and service corporation based in Spain, provides ground services for over 70 million passengers and 3.5 million tonnes of cargo a year on behalf of some 650 client companies. With its workforce of around 33 000 personnel, Swissport is active at 179 airports in 41 countries on five continents, and generated consolidated operating revenue of CHF 1.9 billion (EUR 1.2 billion or USD 1.7 billion) last year. www.swissport.com / www.ferrovial.com