Kissing is now strictly forbidden at a British railway station to avoid delays. The country goes against typical European norms for saying goodbye at public stations and airports.

The British certainly have a reputation of prudish people, leading to age-old prejudices about them being extremely conservative and even the release of a comedy series such as “No Sex Please, We Are British”. These are, of course brute exaggerations and most British people are today just as liberal as their European neighbours on the other side of the Channel. However, this subject has been brought up recently by a new ban at the Warrington train station in Cheshire. The ban is not on smoking, nor does it have anything to do with chewing gum or busking: there is a ban on kissing.

After a GBP 1 million refurbishment, the management of the station wishes to see operations running smoothly. Therefore, they want to prevent a train to be delayed just because a couple is kissing goodbye for an overwhelmingly long time. It was noted before the reconstruction that people kissing before the train leaves caused congestion on the platform and delays. Perhaps this ban is not only down to prudish Brits, yet common sense. After all, the goodbye kiss does not have to be on the platform.

To be fair, there are similar notices all around Europe suggesting that the goodbye process should be as speedy as possible in order not to infringe on the travel plans of others. There are many ‘kiss and goodbye’ signs outside numerous international airports. Perhaps the problem with Warrington station is not only the reputation of the British, yet the fact that it actively bans the kissing rather than light-heartedly suggests it should be quick. The train station organizers probably would argue, that in order to avoid delays, there was no other alternative. 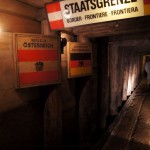 British holidaymakers are not put off from holidaying in Spain despite the recent bombings carried out by the Basque separatist terrorist organisation, ETA, according to the Skyscanner travel site.